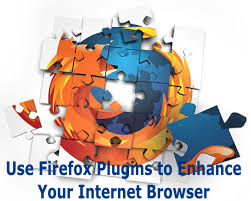 Use Firefox Plugins to Enhance Your Internet Browser.

The Web Developer addon for Firefox is probably the most useful one for a webmaster. This addon allows to view and edit many components of a site directly from the browser. The Web Developer Firefox addon offers many CSS related features, including the ability to disable styles for the site one is currently viewing.

If one is not familiar with the number of sites, which are not done professionally and which can be viewed only in Internet Explorer, it might be strange why the IE Tab Firefox addon made it in this list. However, since many sites can be viewed in IE and nothing else, the IE Tab Firefox addon comes very handy because it allows (without leaving Firefox itself) to view a site the way it will be displayed in Internet Explorer.

Firebug is another Firefox addon many webmasters can’t live without. Firebug has many fans and for them it is even better than the Web Developer extension. In any case, it is not a problem to get both extensions and see which one works better. Firebug and Web Developer are not exactly the same because Firebug allows to edit, debug, and monitor CSS, HTML, and JavaScript from the browser itself, while the functionality of Web Developer is not slightly different.

HttpFox is very useful for troubleshooting. HttpFox monitors and analyzes the HTTP traffic (both incoming and outgoing) between the browser and the web servers. This way it is possible to spot problems and/or to catch unauthorized traffic.

JSView Firefox addon is a really cute small addon. Thanks to JSView addon, it is possible when browsing the page, to view the source code of external files, such as CSS or JavaScript files. The “View Source” command shows only the HTML code itself but very often it is CSS and JavaScript files that are more interesting to see and now this Firefox addon presents the opportunity to do it.

HTML is one of the things a webmaster most frequently works with. This is why a convenient and reliable HTML validator is a must. The HTML Validator for Firefox is a top choice because it allows to validate the HTML code of a page directly from the browser.

Firefox addons are really numerous and there are so many useful extensions that it is not possible to list them all. The 7 Firefox addons listed in this article are just a small fraction of the tens of great Firefox extensions a webmaster can download and use on a daily basis.