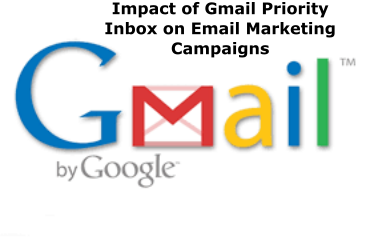 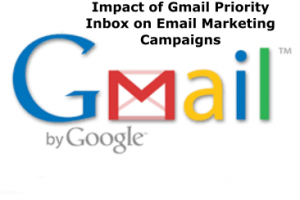 Impact of Gmail Priority Inbox on Email Marketing Campaigns. Google have introduced a new feature for their popular Gmail free webmail application that can automatically sort the user’s incoming email into three groups. This new feature, called ‘Priority Inbox’, is intended to reduce the problem of overloaded inboxes by determining what is and isn’t important and sorting it into ‘Important and unread’, ‘Starred’ and ‘Everything else’.

Although the benefits to users appears obvious, this new feature does pose implications for the delivery of email marketing campaigns.

As part of the Google Apps suite of services, which also includes Google Calendar and Google Docs, Gmail provides users with over 7GB of data (and counting). Users can either store and keep all their emails online for accessing from any compatible device in the world or emails can be made available in desktop email software, such as Microsoft Outlook.

Using the new Priority Inbox feature, Gmail identifies the most important incoming emails and groups them at the top of the user’s inbox under ‘Important and unread’. Emails deemed to be of lesser importance are grouped into a section beneath called ‘Starred’ and other emails are grouped at the bottom in ‘Everything else’. Any emails that aren’t considered genuine are classified as spam and not presented in the inbox at all.

According to Google’s own Web site, Gmail achieves this automatic sorting by being trained over time by the user’s actions. For example, emails from people the user regularly emails too would be considered important, as would emails containing the same keywords used in other opened emails. Replying, archiving and deleting emails also trains Gmail and it is claimed by Google that the Priority Inbox gets more intelligent when lots of emails are received.

Despite the growth in social media as a digital marketing tool for interacting with customers, email marketing remains a very important communication channel. In the UK, Ofcom published their annual Communications Market Report in August  and it reported that 67% of the time that 16-24 year old people spent on the Internet was for email – the same as instant messaging but 10% less than social media. The figure was even higher for the over 55s, with 36% of them using email every day and 47% at least once a week.

Far from being junk mail, as some people may consider it, email marketing can be a powerful tool for not only gaining new customers but for engaging with existing ones as well and can give customers priority information on new products and special offers, plus exclusive competitions and market insight.

The challenge that companies have with email marketing is getting recipients to open the emails and then perform the desired actions. This starts with an engaging subject line and then, once opened, the email must contain a marketing proposition of interest to the recipient to encourage them to clickthrough to the related online content.

The Gmail Priority Inbox also poses challenges getting emails into the ‘Important and unread’ section at the top of a user’s inbox where there is the greatest chance of them being opened, especially immediately. With legitimate companies already having to fight against their emails being misidentified as spam, this feature makes it even harder to achieve marketing objectives.

If recipients are regularly opening emails from the company, and especially if they are not deleting them immediately and even archiving them, that will greatly increase the chance of further emails from the same company being automatically sorted into ‘Important and unread’. But if the emails are being infrequently read, they could be sorted into ‘Starred’ or, worse still, ‘Everything else’ where they may never be opened. Another challenge is that recipients are usually encouraged not to reply directly to email marketing, which further increases the likelihood of the emails not being considered important.

With Gmail now also prioritising emails containing the same keywords as those previously opened by the user, digital marketing teams may also need to adopt similar methods employed in search engine optimisation. What is being said in the emails will become more important than ever as the text will be machine read, too.

Feedback from email marketing experts questioned on the eConsultancy Web site suggest that the Priority Inbox could actually be a positive development for companies. Focusing on writing subject lines that stand out in the recipient’s inbox, as well as optimising messages and making them relevant, could reward email marketers with better response rates than their competitors. However, they also warn that the current sending of emails at the optimal time of the day to gain a response may not be as important in future and that open rates will probably drop for some senders.

The impact of the Gmail Priority Inbox is possibly more relevant at the moment to companies sending emails to consumers, rather than B2B marketing, as businesses (especially larger ones) often use their own email domain names and email software like Microsoft Outlook which don’t employ the same technology at present.

However, it’s clear that the rules of email marketing are evolving and digital marketing professionals need to be aware of this. Priority Inbox may currently only be a feature specific to Gmail, but other providers could follow, and with more people potentially being lured by Gmail as the number of smartphones installed with Google’s Android OS increases, automatic sorting of all emails may become a new standard.